What impact has Twitch’s gambling policy update on October 18 had on the numbers on Twitch and casino streaming in general?

Since Twitch announced its view on gambling on September 21, streamers and the iGaming industry have been analyzing how the final policy update would influence the live streaming market. The growth of casino streaming in recent years made it a big discussion point in the industry.

On October 18, Twitch finally shared the news about an updated section called Prohibited Gambling Content in their Community Guidelines around 10.00 AM Pacific Time. Several streamers on Twitch were affected by the new rules that prohibited gambling on the following sites or associated domains; stake.com, duelbits.com, roobet.com, and rollbit.com on their platform. Twitch also take into account whether streamers use or encourage VPNs to evade geoblocking, and whether the site is licensed in the US or other jurisdictions that provide sufficient consumer protections.

The result of the policy update has left many in the industry and the streaming community with a lot of questions. Whether this has been a full ban on all crypto-focused Curaçao licensed operators? And how big of an impact will this have for the casino live streaming market as a whole? As of today, the only sites that have been prohibited are the ones mentioned in Twitch Community Guidelines, and Twitch haven’t made any updates to it since October 18.

With this blog post, which is purely based on our data and expertise in the streaming market, we hope to bring some clarity to this topic by looking at our data and the different trends that we see.

The growth of gambling on Twitch

It’s fair to say that the vast majority of the viewers enjoy the entertainment that gambling on live streaming offers the viewers. It’s fast-paced, it’s exciting, and it’s very easily digestible content. Thanks to the beauty of RNG, combine slot content with a streamer and this will become a “reaction hit machine” that generates fun and memorable moments totally out of the blue. Both the wins and the losses.

Since the inception of casino streaming in late 2015 and early 2016 Twitch has been the home for casino streamers throughout the years.

In November 2021 we added YouTube live stream tracking to our AI. And looking at the overall viewership distribution between the two platforms, it’s clear who has been the dominant player. To put it in other words, YouTube has been the home of replays, reviews, big-win videos and other gambling related content (VODs), but the undisputed number one in casino live streaming has been Twitch. 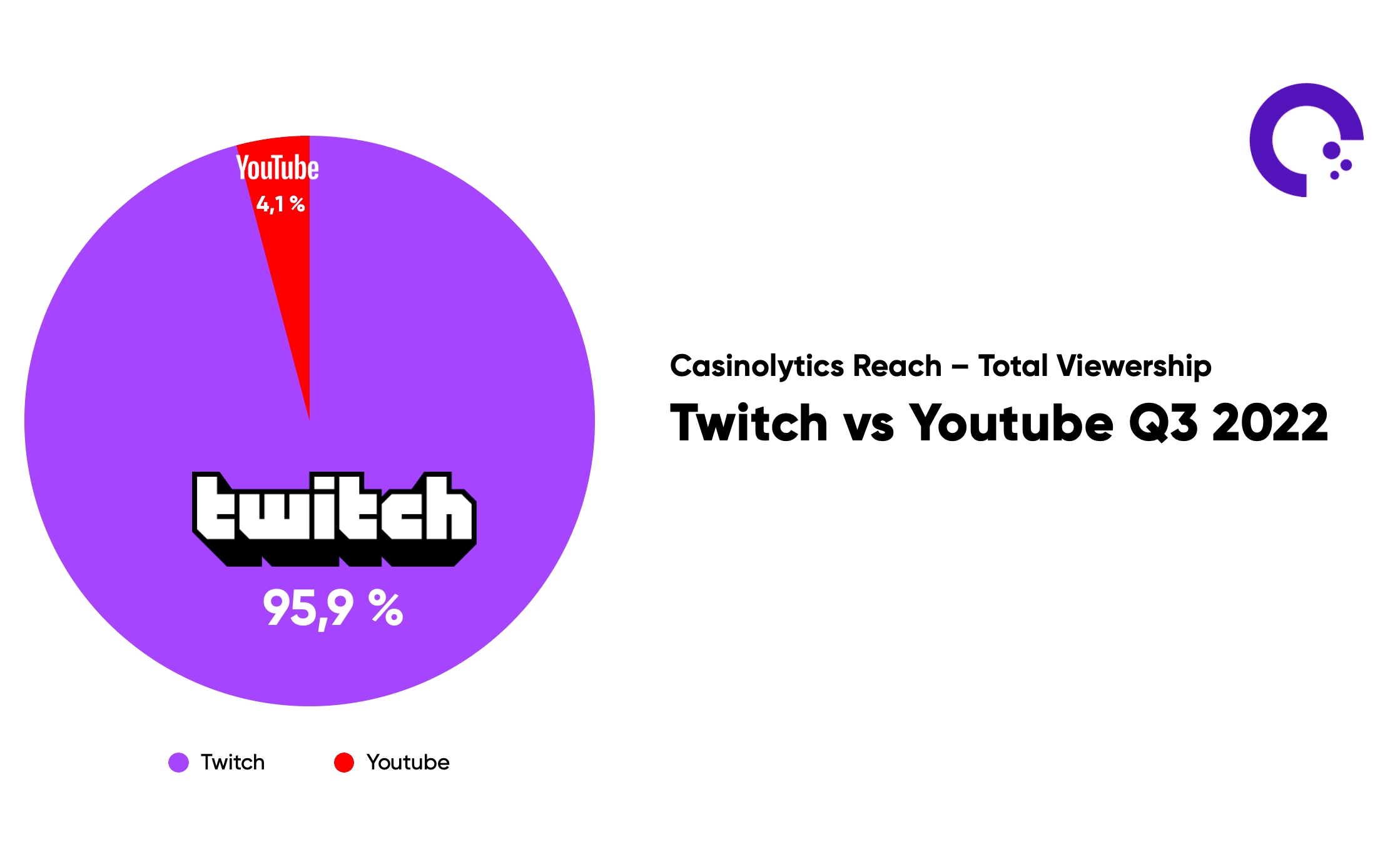 Casino streaming with and its popularity has grown at an extraordinary speed. The graph below shows the total reach (viewership) that our AI has tracked since 2020. Looking at the end of September and October, we see a big decline in total viewership on Twitch which is an effect of the updated gambling policy. 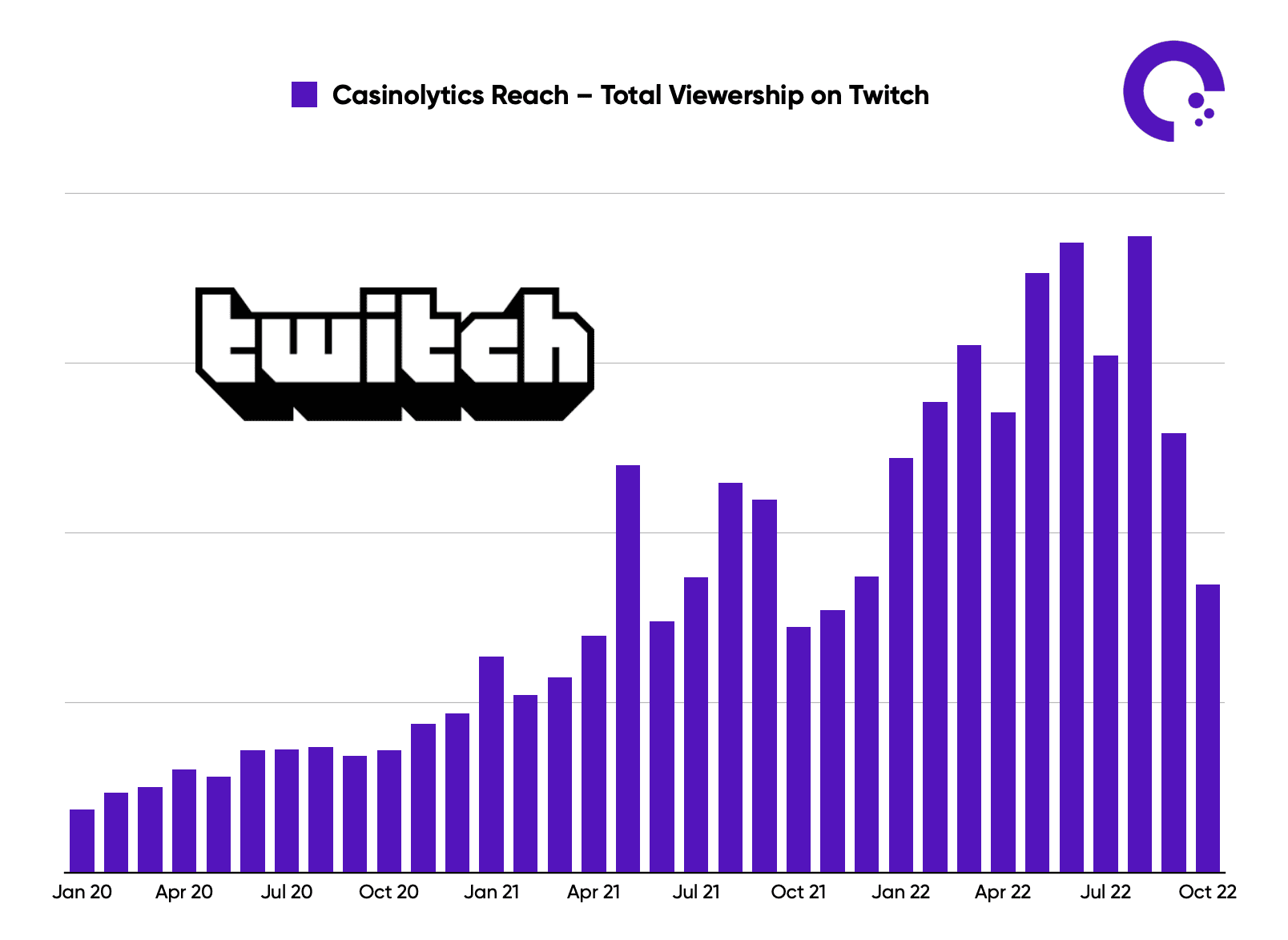 The numbers on Twitch before and after the gambling policy update

How big is the decline in Twitch numbers? It’s big, so let’s look at the numbers on our platform between October 1 and November 1.

On October 18, streamers were still streaming on the prohibited sites since they are located around the CET time zone. And since the news from Twitch wasn’t sent out before 19.00 CEST, more than haft of that day, some streamers streamed as usual waiting for the information from Twitch. So to make this analysis as accurate as possible we will not include October 18 in the before and after comparison. 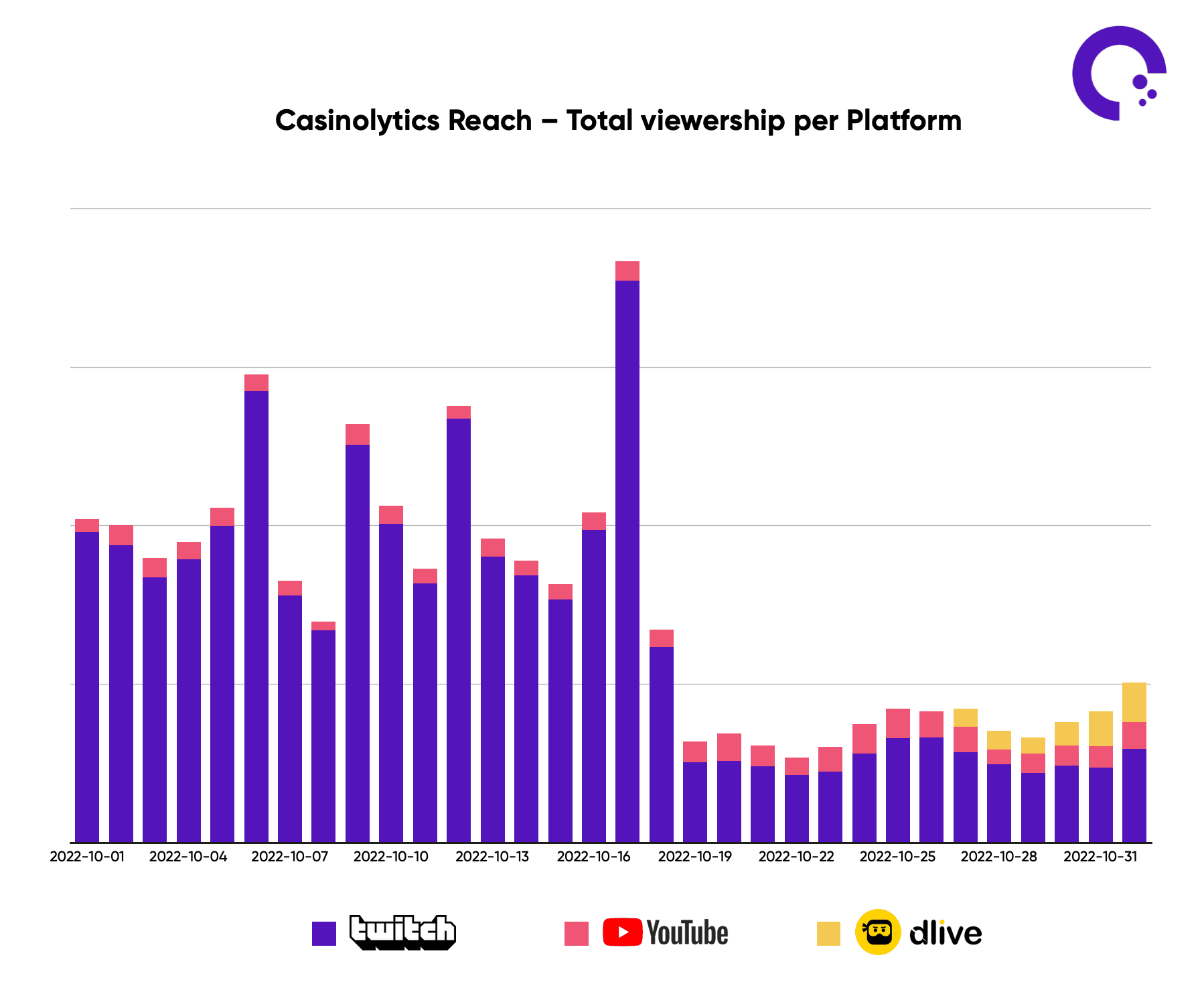 The graph above shows the total reach on our platform shown per platform, including Twitch, YouTube, and Dlive. The data shown is from October 1 to November 1.

It’s now been two weeks since the new policy came into force and these are the first trends that we see in our data:

The fact is, casino streaming as an entertainment form is definitely here to stay in one way or another. Throughout the years it has built a strong community around it. Will the numbers and interest be as high as they were? How will casino streaming evolve over time? Will Twitch still be the number one platform in six months from now?

It’s hard to say, but one thing is for sure it won’t happen overnight. Perhaps most importantly, the data shows us that the viewers have a big appetite for live streamed casino related content. Without the viewers, there won’t be any casino-related live streams.

And as with any big change in an industry, it will take time before people and the industry will adapt and find new ways forward. Thanks for reading!

About us:
Casinolytics an independent AI-driven data science company providing live streaming data and insights for brands in the iGaming market. Since our inception, our core focus has been to present transparent and highly accurate actionable data. We do this by manually adding streamers to our platform using our streamer discovery module and games to our AI using machine learning technology. Today, we track 1600+ streamers and 1400+ games from 60+ different game providers.