Artemis vs Medusa Slot by Quickspin 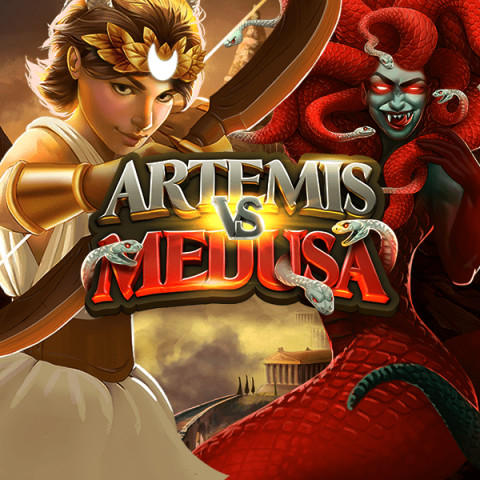 Artemis vs Medusa slot by Quickspin is a dynamic mythology-themed battle slot.

Artemis, the Greek goddess of the hunt, wilderness and the Moon, faces off Medusa, a monstrous gorgon with living snakes in place of hair, who could turn her enemies to stone just by looking at them. Behind the 5x4 grid with 1024 betways, we can see the fantastical version of Mount Olympus, with stone guards facing the reels, as the epic soundtrack adds to the atmosphere. Highest paying symbols is Artemis herself, mid-paying ones are Medusa, Harpy, Griffon, and Minotaur, while the lower-paying symbols are colourful gems, all beautifully designed. Wild is the golden antler, and a bow and arrow symbol represents the Scatter.

The ultimate battle starts when you land three Scatters and trigger the Unlimited Battle Free Spins feature. The battlefield gets another dimension, and we get to see Artemis and Medusa, with her monster minions, going to war on top of the reels. There is also a meter that shows the monsters' progress. Whenever one or more Artemis symbols land on the reels, all present Monster symbols add up on the meter. Also, for every Artemis symbol, one monster type vanishes from the meter, in the order of the lowest value to the highest, awarding you a bounty. If the meter exceeds 15, Artemis retreats in defeat, and the free spins are over. Battle also ends when you defeat all the monsters.

Quickspin sure knows how to come up with a delightful concept and go all-in when realising it. The gameplay flows nicely and erupts during the intense battle feature with nifty potential.