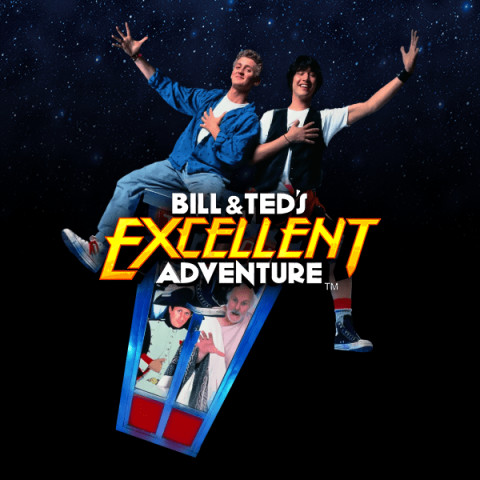 Bill and Ted's Excellent Adventure slot by IGT pays tribute to the cult sci-fi comedy from 1989 with the same name.

Behind the 5x3-reel setup with 20 paylines is the iconic Circle-K store, and the movie soundtrack plays in the background. The higher-paying symbols are characters from the movie, while the card ranks make up the lower-paying symbols.

Bill and Ted's Excellent Adventure is a low-mid volatility slot, with an RTP of 96.25% and the maximum potential win of 2500x your bet.

When Bill and Ted both appear on the reels, they may randomly team up for The Wyld Stallyns feature, transforming all Bill and Ted symbols into Wyld symbols.

The Lock and Respin is the main feature of the slot, and it starts when you land Phone Booth Scatters on reels 1, 3, and 5. It is a respin feature, which will lock any Historical Characters or Instant Prizes that appear during the respins. You start with three initial Respins, but the number resets every time you land a new symbol. There are eight Historical Characters, one of which has the Jackpot Upgrade role. Jackpot Upgrade Historical Character changes whenever it lands. The Jackpot can upgrade up to 8 times, reaching a maximum of 1,800x your bet. Locked Instant Prizes are cumulative and awarded in addition to any eligible Jackpot. The feature continues until you run out of Respins or fill all 15 positions.

The No Way, Yes Way! feature offers a second chance at triggering the Lock and Respin Bonus on any spin where Phone Booth Scatters land on reels 1 and 3 only. Reel 5 will respin in hopes of getting you to the main feature.

IGT brought this nostalgic classic to the reels with some fun gameplay. The theme and the volatility might not be for everyone, but we fully enjoyed testing it and getting a blast from the past. The features work together nicely and can provide some good wins if you are lucky. To quote Ted, "Strange things are afoot at the Circle-K"; you never know what might happen.