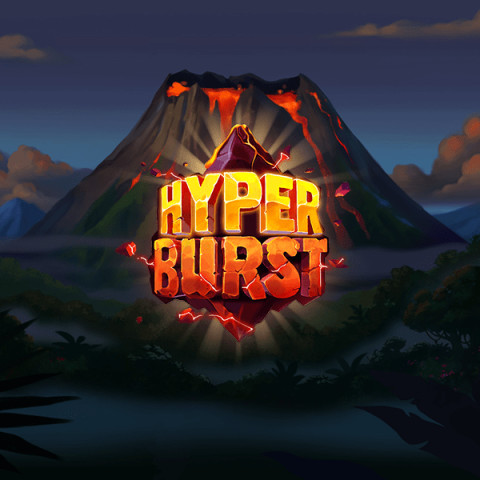 Hyper Burst slot by Yggdrasil Gaming is a highly volatile beast, ready to erupt with scorching wins and lava-hot respins.

The game takes place on a tropical volcanic island, spewing ash and lava across a 6x4 reel field with 25 paylines, as a tribal-style soundtrack plays in the background to set the mood. Looking at the game might remind you of a mix between Elk's Tahiti Gold and Gold Volcano from Play'n Go, which is not a bad thing. The paytable consists of four totem masks as high-pays and four card ranks carved in wood as low-pays. Wild is a golden block that has its premium payout values, six being worth 100x your bet, making it also the most valuable symbol.

Hyper Burst is a high volatility game, with an RTP of 96% and max potential win of over 12,000x your bet. The hit frequency of 22,6% gives the gameplay a nice pace, especially with the addition of respins.

Each win will grant a respin with an added perk with every consecutive win.

The first respin will make the lava spill over and mold two reels into a 2x2 colossal reel. Continuous respins expand the colossal reel to a 3x3 and then a 4x4 Giga reel.

Once the Giga reel is active, the Hyper Respins will start where back-to-back wins boost the win multiplier from x2 through x3, x5 up to x10.

The Hyper Respins feature rages on as long as you keep winning.

The golden Wilds substitute all and can drop as big symbols to produce some really nice wins.

Yggdrasil turned up the heat in Hyper Burst and crafted a very engaging and thrilling slot that won't make you miss the bonus round too much with all the respins going on. Check out this hot x741 win from Jugipelaa.