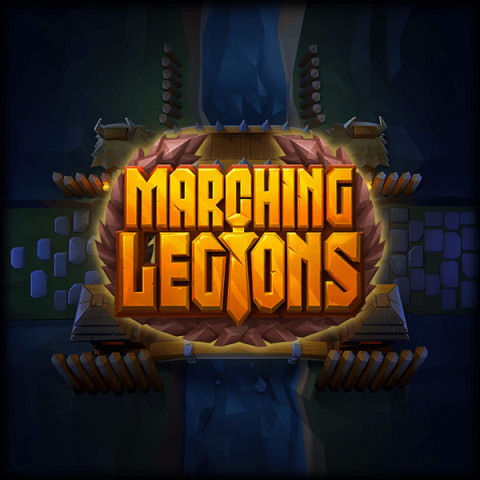 Marching Legions by Relax Gaming is an action-packed slot inspired by the Roman Empire.

The developers opted for a more playful, cartoonish design that gives this slot almost a board game look. We get a bird-eye view of a 5x3 game area with 243 betways, surrounded by a Roman courtyard with two stone-paved passages on each side of the reels. The symbols are Ceasar, eagle, and temple tokens, gladius, sword, laurel wreath, the legionary, and a banner. The triumphant soundtrack plays as you spin, adding to the atmosphere.

Marching with the Romans is a high volatility experience, with a max winning potential of 10,000x your bet. The RTP is an impressive 98.12%, which is beyond the industry average, but dips to 97.13% when you go for the Bonus Buy feature.

Landing a full stack of legionaries will trigger the Marching Re-spins. The Stacks will march one step to the left before each Re-spin, and any additional full Stacks that land during the Re-spins will turn into marching Stacks. Re-spins will continue until the stacks of legionaries march outside of the game area.

When you land two or more partial Stacks of legionaries, they will nudge. The Nudge feature won't activate if there is already a full stack on the grid.

For every Stack of legionaries that march outside of the grid, you will progress on the Collect Meter. After filling five sections of the Meter, you will trigger Free Spins. The bet for the Free Spins feature is the average bet used when collecting legionaries.

The Free Spins feature starts at Wave 1, where you get a legionary Stack on the far-right reel. You will receive an additional Stack as you progress through each wave until the entire grid fills at Wave 5. You conquer the waves by filling a Meter with three special Horn symbols. The FS round ends when Stacks march off the grid, and you have not filled the horn Meter to add another wave.

For 120x your bet, you can also get a quick pass to the bonus round with the Buy feature.

Marching Legions pumps you up with excitement as you try to conquer the reels. The game is all about the legionary symbols and the horn symbol during the bonus round. There is no Wild, and the base game can get a bit drawn out. However, the RTP and the potential are both pleasantly surprising, making it worth a spin.