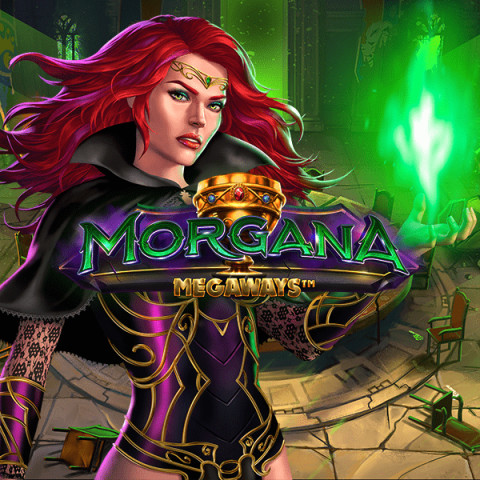 Morgana Megaways by iSoftBet is the next chapter to the provider's Twisted Tale series that focuses on the villains of traditional tales. After bringing Sheriff of Nottingham and Queen of Hearts on the reels, iSoftBet is introducing us to the reimagined Morgan le Fay, a powerful enchantress in the Arthurian legend.

The game opens in King Arthur's Camelot, where six reels with up to 117,649 Megaways sit in the middle. The fantasy theme is captured perfectly in this slot. The visuals are rich, and so is the enchanting soundtrack that completes the mood. On the higher-paying end of the paytable, we have a diamond, dragon, eye, and Morgana, while on the lower, we have the usual card ranks designed to fit the concept.

Morgana Megaways is a high volatility game, with an RTP of 95.98% that goes up to 98.01% with the Bonus Buy feature. The maximum potential win is over 10,000x your stake.

The gleaming green "W" is a Wild, and the crystal ball is a Mystery Symbol that transforms into any symbol, other than Scatter or Wild. The Max Megaways feature can start at random during the base game and force the reels to a 117,649 Megaways outcome. Landing 3, 4, 5, or 6 golden grail Scatters will grant you 10, 15, 20, or 30 Free Spins. During the FS round, collecting required symbols and progressing through levels will award different Multiplier prizes, additional free spins, and boost the minimum Megaways. The collection exploit starts with getting 20x"9s". The required symbols advance from the low end of the paytable upwards as you progress through the levels. The required symbols don't have to form a winning combo to be collected. If a Mystery Symbol lands during the bonus round, it will transform into one you need during that level.

In case you don't feel like waiting for the Scatters to drop, you can go for the Bonus Buy option priced at 80x your bet.

Morgana Megaways is an outstanding release. The detail-oriented design, distinctive features, and good potential work together to provide an all-around enjoyable experience and bring something different to the Megaways universe.