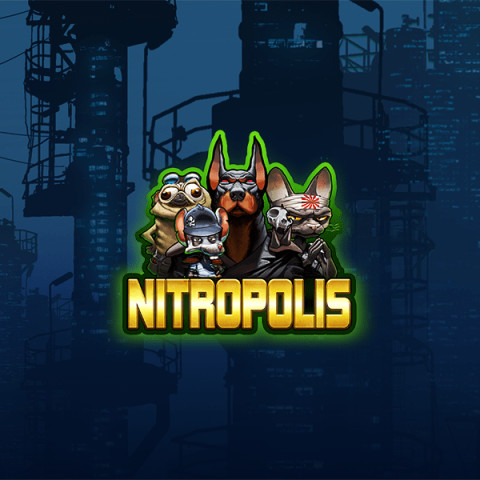 Nitropolis by ELK Studios introduces the new trademarked mechanic, Nitro Reels, in this exciting and atypical slot that can unlock up to 85,155,840 payways.

The game takes place in the post-apocalyptic world, more specifically, in the rugged city of Nitropolis. There, four clans, Dirty Dawgs, Gritty Kitties, Pug Thugs, and Rouge Rats, are battling it out for the place of the top-dog (or top-cat, I guess), all to the great rock/electro-funk soundtrack. The paytable consists of twelve symbols; low-pay card ranks, mid-pay clan emblems, and high-pay clan leaders, where the Dirty Dawgs' Dobermann is the most valuable one. A sinister mushroom cloud is a Wild.

Nitropolis is a highly volatile game with an RTP of 96.1% and the max potential win of 10,000x your bet.

Nitro Reels always cover two spots on the reels and hold from 4 to 12 identical symbols. A Nitro Reel can randomly upgrade to hold more symbols, which increases the number of payways. It can also randomly Respin at the end of a non-winning spin for a second chance to win.

The Winning Respins activate after every win in the base or bonus game, making all the winning symbols spin again.

Spinning-in 3, 4, 5, or 6 Scatters will award you with 10, 15, 20, or 25 Free Spins. Before the round begins, one random symbol will become a Scatter Pay, and three or more of those will award a win, no matter the position. Nitro Reels are Sticky during the bonus, locking in for the entirety of the feature. Bonus retriggers by landing three or more Scatters again. This also adds an additional Scatter Pay.

ELK got really creative with Nitropolis, bringing something new to the table with both the unique theme and the mechanics; nonetheless, the payouts could've been higher for the number of payways that the game offers.