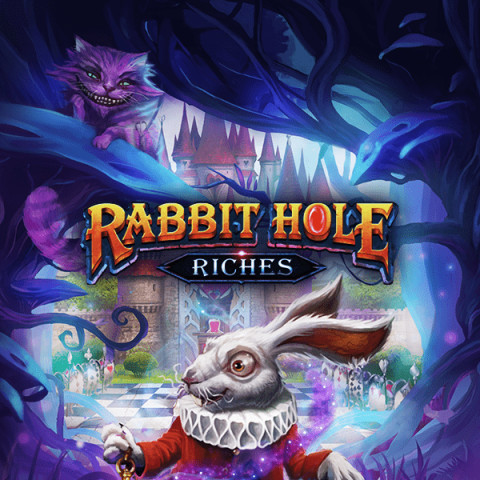 Rabbit Hole Riches slot by Play'n GO takes us on a vivid Alice in Wonderland style adventure across a 3x3-reel formation with five paylines.

The backdrop gives us a peek into the Queen of Hearts' kingdom and her army of Card Soldiers, as a victorious tune plays in the background. On the paytable, we get four Card Soldiers as low-pays, and a magic tree, hookah-smoking caterpillar, Mad Hatter, and the Queen of Hearts as high-pays. The Standard Wild is colorful in a golden frame, and Scatter is a pocket watch.

Rabbit Hole Riches is a medium volatility slot, rated 6/10 on the Play'n GO's scale. The default RTP is 96.23% but can be adjusted by the operators, so check before playing. The maximum potential win is 5,000x your bet.

Landing three Scatters will launch you through the Rabbit Hole Bonus, where you get to pick one of four different bonus features.

At any time during the base game, the Rabbit Reward feature can activate to help you down the hole. The Rabbit randomly shows up on the screen to swing two Scatters on to the reel. In case the third Scatter doesn't land, the Rabbit will still get you to one of the bonuses of his pick. So, let's check out the options:

Teacup Party Pick Bonus: going through the green rabbit hole will lead you to one single spin with only high-pays on the reels. When this spin is complete, you choose one of the teacups that pop up below the reels to reveal a symbol that will pay from 2x to 8x your stake for every appearance they make on the grid. You then get to make another pick or collect the prize.

Cheshire Cat Respins: going through the blue rabbit hole will lead you to a respin with a 1x3 Cheshire Cat Wild. The first respin win is guaranteed and awards a second respin. Respins continue until a no-win spin.

Tower Power Free Spins: going through the yellow rabbit hole will lead you to 7 FS with reel-high Red and White Tower Wilds. Before the spins begin, you need to pick a Tower to represent. The battle between Towers can then start, where you get one point for every winning position that lands on your Tower. If your side wins, the total winnings from the round double. If spins end in a draw, you get +7 FS for a rematch.

Queens Army Free Spins: going through the red rabbit hole will lead you to 8 initial FS with only special Queen Wilds and her army of low-pay Card Soldiers. The win multiplier increases by +1 on each payline win. If you land 3 Scatters, you get +3 FS. There is no limit to the multiplier or the number of FS.

Rabbit Hole Riches is quite a charming slot. Well thought out, with a nifty potential and range of features, especially for a medium volatility game.