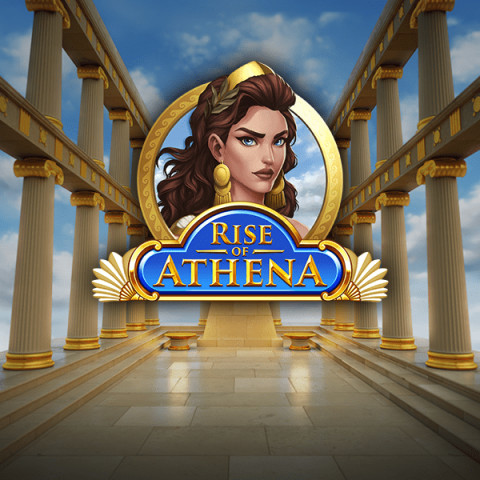 Rise of Athena slot by Play'n GO brings some straightforward action to honor the powerful Olympian goddess of wisdom and warfare.

The design is simple and clean-cut. The golden 5x3 reel setup, with ten fixed paylines, sits in front of Athena's temple, surrounded by the light blue skies. The low-pays are marvel card ranks with olive branches sticking behind them, while the high-pays consist of a scroll with an Owl of Athena, amphora with smoke coming out of it, helmet, Pegasus, and Athena herself. The Athena's owl Glaukopis is a Scatter, and the coin symbol is a Wild.

When a Wild drops, the coin will flip to uncover the bronze, silver, or gold side that carries a multiplier of x1, x2, or x3. As per usual, Wilds substitute for all symbols except for Scatter. Forming winning combos with more than one will accumulate the multipliers.

Landing three or more Scatters will award 12 Free Spins. 3, 4, or 5 Scatters in the view also award 1x, 20x, or 500x your stake, in that order. During the bonus round, Wilds turn sticky until their multiplier runs out. The multiplier lowers by 1 between each spin.

Play'n GO kept it simple and chiseled while still adding that special something with the multiplier wilds that can surprise nicely both during the base game and as they get partly sticky during the bonus.