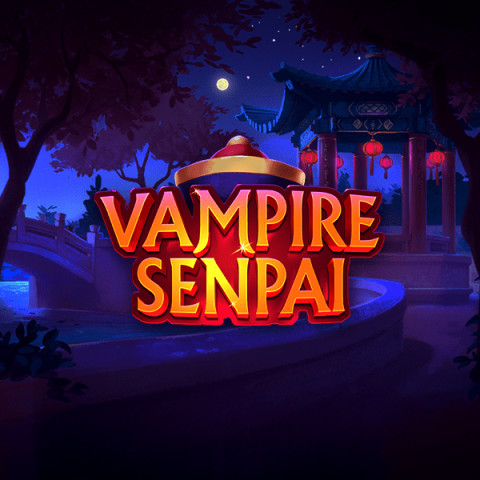 Vampire Senpai by Quickspin is a creative slot that mashes two popular themes together and spins us into the fantastic world of Chinese vampires.

Jiangshi, a hopping vampire showing up in Chinese legends and folklore, is what inspired the talent at Quickspin for this release. However, the theme is not as dark as you would expect, the designs are cartoon-like and rich, and the vibe is fun, even comedic as the vampire symbols hop around the grid. The soundtrack is mysterious but zen, and the overlay of sound effects as you spin works perfectly on building the anticipation, as do animations that go with it.

The vampire hopping action plays out on a 5x5 grid with 40 paylines. The volatility is at the higher medium, rated 3.5/5 by the provider. The RTP is sitting at solid 96.19%, with the max potential payout of around 8,800x your bet.

Vampire Senpai is all about the wilds and the free spins round. When you land a Vampire Wild, it will transform any surrounding human symbol into a Turning Wild, which will then act the same, and this chain will continue until there are no more human symbols next to them. On any spin, Talisman Turning Wild feature can activate, and 3-9 Talisman Wilds can appear on reels 1-4. Landing 3, 4, or 5 bell Scatters will award you with 7, 8, or 9 Reanimated Free Spins. During the FS round, Talisman Wilds will start appearing individually (in the base game they can only pop up during the Talisman Turning Wild feature). Any Vampire Wild will stay on the grid during free spins and hop over to a random position at the beginning of every spin. Talisman Wilds will stick to the grid until the end of the round. Both wilds will award +1 free spin for each one that lands.

The idea and the execution of this slot are so fun and unique. It's always refreshing when someone steps out of the box and covers a new story, not explored through slot themes before. The maths and features are also solid, making this release worth a spin.