Starburst from NetEnt is perhaps the world’s most known online slot ever made. What was the somewhat hidden reasons for its success? Read our analysis on which key factors that paved the way to make Starburst the most visible brand in the history of online slots.

Throughout the years, we have seen many great online slots become successful and almost synonymous with the industry. In this article series, I will look at some of the most famous (and probably also best performing) slots in the history of iGaming and give my view on why they became so famous and popular among players. The thoughts in these articles are my own and based on thorough research and the data that we have. Nothing more, nothing less.

We call this article series “The hidden success story…” and the games we will be analyzing in the upcoming weeks are:

The importance of awareness, timing and target audience

The common denominator in the success of all these slots is that they all have had extremely high brand awareness. The other thing is the importance of timing when they were released. And last but not least, they’ve had a great “product-market-fit” that meets and exceeds the target group’s needs.

The most prominent companies globally are the visible ones. In a world of constant buzz, noise, and information, it’s all about making your brand heard, visible, and talked about. As the future is shaping, live streaming plays a pivotal role in how we consume entertainment and information moving forward.

Today, you often see these slots at the top of casino lobbies. Here is a screenshot on leovegas.se from August 2022.

Starburst – The world’s most known slot

Starburst is Starburst. Almost everybody knows Starburst, and I’m not talking about the Starburst Candy. Also, an interesting side note – did you know that Starburst is based on the same mechanics as Novomatic’s Power Stars released around 2008, including features such as win both ways and full reel wild respins?

Anyway, in 2012, online casinos were booming, they were something new and exciting for the players and NetEnt was the number one choice for any new casino that hit the market. This was the time when new casinos were popping up at a rapid speed. NetEnt had famous games like Gonzo’s Quest and Dead or Alive in their portfolio and were also known for producing the most visually attractive slots in the industry and being the first company to embrace 3D characters in their games. People have even told me: “You won’t run a successful casino without NetEnt” – quite a statement – which strengthened the fact of the position NetEnt was in between 2012 to around the end of 2015.

NetEnt had also some key advantages against their competition at this time. Besides creating “the best slots” they also had an advantage with excellent distribution. In 2012, distribution was one of the key differentiation factors globally, outside of the iGaming industry. Companies with great distribution chains and getting their products quickly to market to a vast group of potential end consumers had the edge over their competition.

Another factor was the innovation of free spins, also known as free games. Giving the casinos (and affiliates) the possibility to attract new players by offering them a way to try out the online casino experience for free with the possibility to win real money. At this time, many of the main markets were part of the .com market, which led to casinos could market themselves to both new and existing players by continuously offering more free spins.

When Starburst hit the market in 2012, it was the perfect introduction slot for new players. It was fast-paced, aesthetically attractive, and highly immersive with great animation and sound, giving players immersive feedback, like the amazing re-spins feature.

Starburst was also very easy to understand, an essential feature for new players being introduced to online casinos. Compared to many of today’s more advanced high volatile slots, Starburst was leaning more towards the low volatility on the volatility scale, which proved to be a winning formula.

I believe that Starburst hit the perfect storm – it was the ideal introduction slot to new players – an excellent product for most people who never had tried online casinos before. Add free spins to the equation, and you will have a perfect mix giving new players the possibility to try out Starburst “for free”. New players loved the experience, and almost instantly, Starburst became the slot every casino pushed through display and traditional advertising (tv & radio) – making it a visible brand, heard and talked about. Please remember, during this time, cable TV was still people’s first choice of device when consuming entertainment. Resulting in millions and millions of people seeing the Starburst brand in their living room during a commercial break or on a banner online. The exposure for Starburst simply went through the roof. 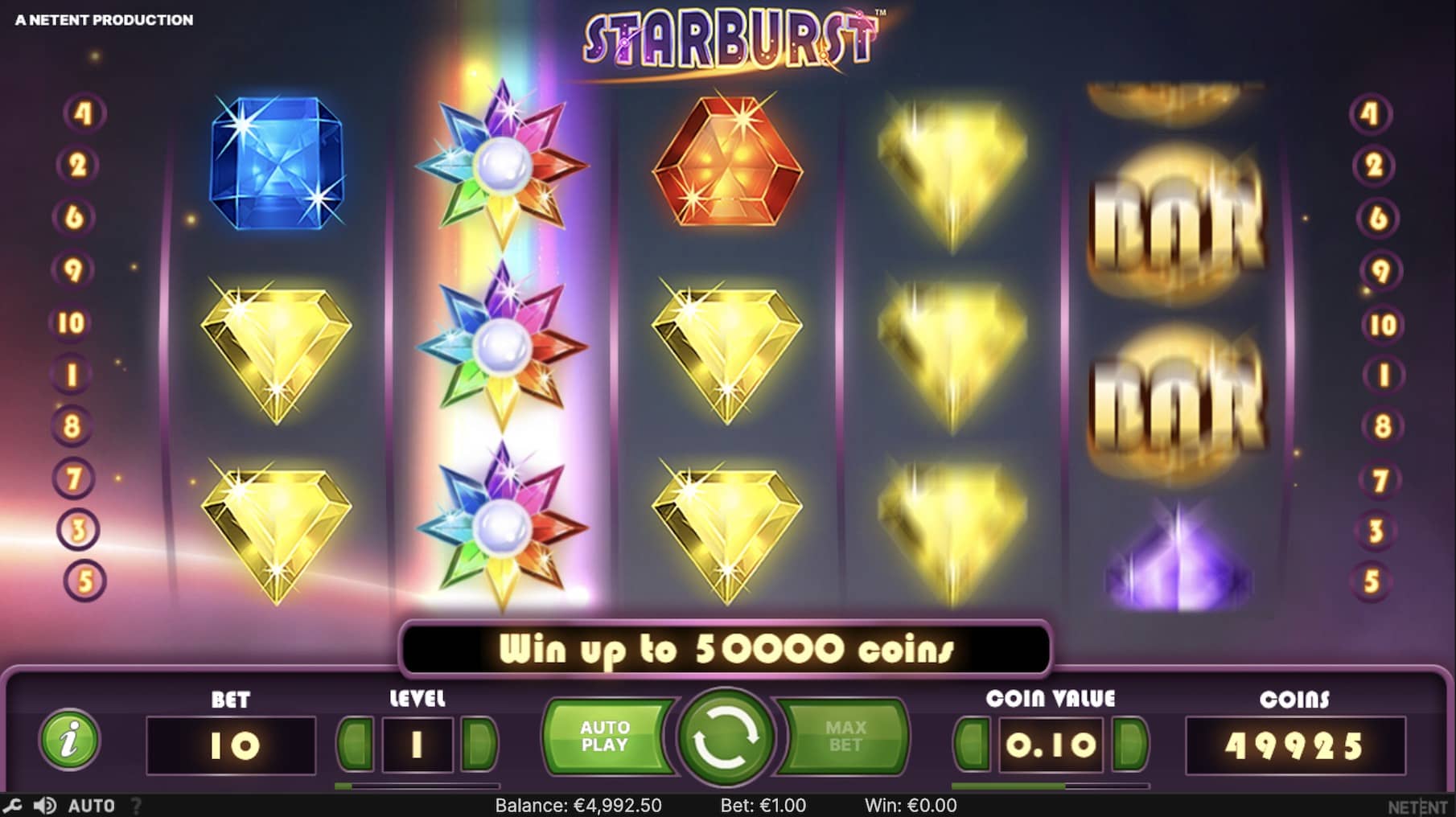 Between 2012 and 2015, I’m confident that the great product-market-fit Starburst had and the position that NetEnt was in played a pivotal role in making Starburst the world’s most known slot today. Perhaps also a tad of luck. To be honest, I can still today play Starburst and try and hit the re-spins (which can be see in the image above) just for the amazing sound, graphics and how it tickles my senses, even if I rather prefer more volatile slots. It’s simply a great game, and I’m sure it’s still used today to introduce new players to the world of online slots.

Make sure to check back next week when we will posting “The hidden success of Book of Dead” and how live streaming started to emerge and it impacted the performance of Book of Dead from PlaynGo. Thanks for reading and hope to see you back here next week!