Nolimit City has had massive success in the live-streaming space by creating the perfect content for streamers. Is this the reason for their financial success that got Evolution interested in the first place?

Evolution’s deal of acquiring the Stockholm-based disruptive game studio Nolimit City echoed in the iGaming industry on Wednesday afternoon. With revenue of around 30m EUR and an impressive EBITDA margin of 77%, it’s fair to say that Nolimit City’s numbers are very impressive and a great addition to Evolution’s brand portfolio.

The second we saw the news about the deal, we immediately dig into our numbers, numbers that showcase Nolimit City’s historical brand awareness and product popularity among the streaming community on Twitch and Youtube. In this article, we give share our perspective and some insights to highlight what role streamers might have played in the success of Nolimit City.

Nolimit City was founded in 2014 when new game studios and casinos were booming. They are definitely not a new kid on the block that some might think and have a roster of industry veterans behind the craftsmanship of their games. Fast forward to 2019, after releasing 15 games or so, their high-volatile western-themed Tombstone was released in April 2019. This was the starting point of the transformation of Nolimit. I’m firm to say that Tombstone was their first big hit, which was followed up by hits the next year with Punk Rocker in February 2020 and Deadwood in May 2020. All these titles have been popular among streamers.

This was a great start, but when was the real turning point? There were definitely some bells, but perhaps not all the whistles. But when San Quentin hit the market in January 2021 something indeed happened. The theme was a new disrupting theme, more extreme bonus buys (a.k.a. super-bonus, which is a standard term these days), and last but not least very high max win caps. In February we saw East Coast vs West Coast, followed by the hugely popular Fire in the Hole in March. And when xQc in May 2021, with over 10 million followers on Twitch started grinding Book of Shadows (released in 2020) the seal was basically closed. 2021 was Nolimit City’s year and every single game they released was top-contender fighting for shelf space on streams. 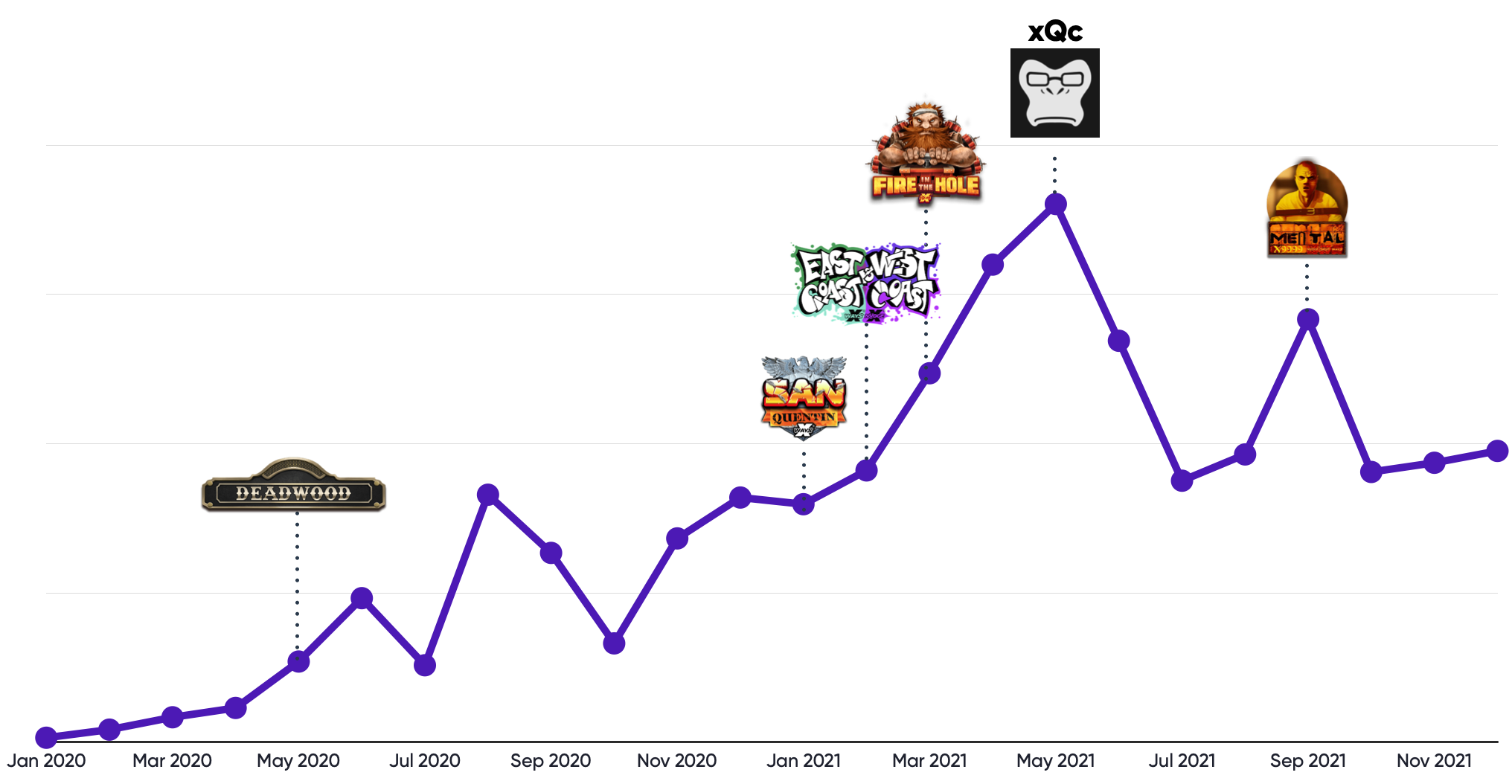 Nolimit City’s success among the streaming community and with millions and millions of people seeing their brand and games I’m confident that it has played a significant role in their financial performance. For any marketeer, it’s no secret that high brand awareness in almost all cases results in stronger financial results.

Designing a product for the right target audience is key in any industry. The general trend is that more and more game providers release games with extreme volatility, high max wins, and bonus buys. About every second or third game that is released has these ingredients. So should all these games appeal to streamers and players in general? The simple answer to this is no. Let me try to explain why they aren’t and what Nolimit City has done right.

A high max payout surpassing ≈20,000x has become a talking point lately in different player communities. Is this important for streamers? Both yes and no. To start off, max payouts matter for a streamer, and they would very seldom continue grinding a game with a “low” max payout, let’s say below ≈3,000x. Your game simply needs to have “potential” as Nolimit City games. But one key thing here is that they need to feel and be achievable and streamers (and players for that matter) would need to hit those max numbers.

So, how do streamers keep on hitting the Nolimit City max wins surpassing 70,000x? It’s basically about two things; first, you will need to have the volume in terms of spins, and secondly, it’s the shortcut to the very expensive (x-wise) super-bonus. Imagine the odds of grinding a game, hitting the super-bonus, and then on top of that also being one of the ones hitting the max win. That’s an extreme scenario and very unlikely. But, with the help of the super-bonus, you are basically fast-tracking your way directly to the finale of the game, and the odds increase significantly, yet still extremely unlikely to actually hit.

Let me give you an example, in Tombstone R.I.P that has a crazy max win cap of crazy 300,000x, the likelihood of hitting the max win cap from the base game is 1/130 million spins. Which is almost the same odds as winning the lottery. So, how has Nolimit City done this to make it achievable and make the math in the game work? It’s actually fairly straightforward, if a player buys the super-bonus the change of hitting the max win narrows down to 1/16 thousand spins. That’s a significant change in the improvement of the odds of actually hitting the max win cap, but then it will of course cost you 3000x times your bet which is whole another story. These numbers have been shared online by Nolimit City representatives, so these are publicly available information. As a reference, you can see this as buying a spot directly into the quarter-finals of the FIFA World Cup Finals without ever needing to qualify. You now have highly increased the odds of actually winning the FIFA World Cup, yet it still will be very difficult.

In all Nolimit City games, directly in the game, you can see stats with the highest x-win. Streamers love to gather stats and compete with themselves and others, but you will also see whether the win has been by using bonus buy or organic. In the image below you see the top list for Tombstone R.I.P, where the wins marked with a bolt icon next to them are when a player has bought the bonus. 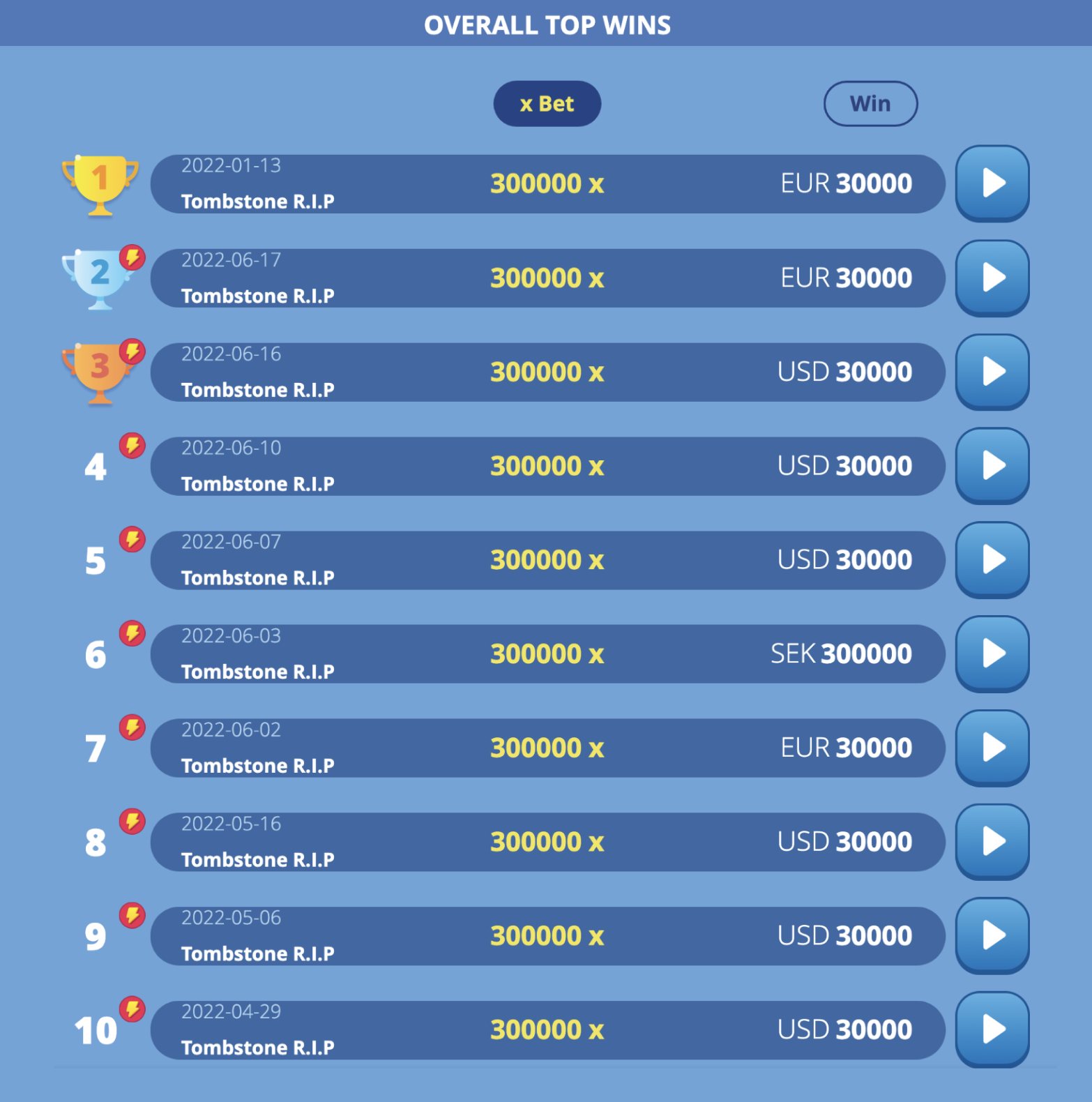 These are just a few of many things that Nolimit City has crafted to perfection and what makes their games very attractive for streamers. As an additional fun fact, did you know that the two most watched games on Twitch and Youtube since 2020 have 5,000x and just above 10,000x in max win?

If you would like to learn more about streamers’ motivational factors, their behaviors, and what elements are important for them in a game – we have crafted our very own player-type model that we use to help our customers to understand how they can create better products for targeting streamers (and players who watch them). And tell you more about why “controlling the time” is important for them and more. We are always ready to have a chat to give you more insights. As always, and until the next one – just ping me whenever on Twitter, Discord, or just send us an email at hello@casinolytics.com and we will take it from there.

The rise of Nolimit (Streamer) City
Casinolytics 2.0 is here
The biggest marketing trend in 2021
Could the streamer performance on Crazy Time impact the Evolution share price?
Streamer impact on Crazy Time?
The Perfect Streamer Slot?
The story behind our new brand identity
A product comes to life
Dead or Alive 2 bonus buy feature effect – Hit or Miss?
The story of Casinolytics
Twitter Instagram LinkedIn Discord Twitch